With its velvet-like leaves and staggering foliage designs, Calathea Warscewiczii is the sort of Calathea that each admirer of the plant will need to add to their always-developing plant assortment.

The Calathea Warscewiczii grows to a height of 3-4 feet and spreads to a width of 3-4 feet. It’s a slow-to-moderate grower that flourishes when placed near an east or north-facing window.

Calathea Warscewiczii is also referred to as Calathea Jungle Velvet because their foliage feels like velvet to touch. Cone-shaped flowers in cream color emerge from the central stalk. The plant does not bloom inside.

It is rare that Calathea plant blossoms inside, and the houseplant instead is kept because of its striking and lovely leaves. Nonetheless, if your plant rewards you with few sprouts, it will probably be in the pre-spring or late winter, and the blossoms are little white blossoms on tall stems. Flowers will typically sprout for three to about a month.

The Calathea Warscewiczii develops to a level of 3-4 feet and spreads to a width of 3-4 feet.

The scientific characteristics of Calathea Warscewiczii are as follows.

To care for the Calathea Warscewiczii plant, check out the detailed guide.

Generally, Calathea prefers a moist growing medium but the amount of water the plant will need depends on the humidity and temperature of its surroundings.

The plant needs to be watered when the top half-inch of the soil is dried.

The leaves of the plant respond ineffectively to tap water due to chlorine and fluoride content. Calathea prefers filtered or purified water.

Calathea Warscewiczii requires bright in direct sunlight 8 to 10 hours per day to thrive.

Direct sunlight is harmful and can scorch the leaves.

In case of low light, LED grow light can be used.

Calathea Warscewiczii loves warm locations. The ideal temperature for the best growth of the plant is between 65-85 degrees Fahrenheit (18-29ºC).

The plant cannot stand sudden temperature changes. Also, do not use cold or hot water for watering, as it will cause roots to shock.

To keep Calathea Warscewiczii happy and healthy, maintain high humidity. The plant grows well in humidity that is higher than 50%.

The humidity can be increased by:

For the best growth of Calathea, good soil composition is an essential factor. The growth medium should be able to store sufficient water and preserve soil oxygen without being mushy.

Ideal soil composition consists of one part perlite and two parts peat or coir. Other organic amendments can also be added for additional fertility, but be aware these decay over time.

The plant can be fertilized using organic fertilizer rich in nitrogen and potassium. The fertilizer should be diluted so it does not burn the plant roots. Calathea may be fertilized every four weeks in summer.

Also Read: How to Care for Calathea Medallion with Growth Tips

How to Prune Calathea Warscewiczii?

Being slow to the moderate grower, the Warscewiczii do not require much pruning. To promote plant growth, prune old and yellow leaves to encourage plant growth.

Use a sterilized knife to simply cut the damaged leaves near the stem.

When the plant gets bigger, move the plant to a bigger pot. A fast-drying plant will let you know now is the right time to move it. Frequent watering requirements and root bounding are the indications for repotting.

Calathea Warscewiczii develops gradually and needs repotting after 2 to 3 years. Over the long haul, the soil becomes depleted of nutrients, so when you repot your plants, you should add some fertilized soil.

Calathea Warscewiczii can be propagated by division. Propagate Calathea by division in spring or early summer.

One method for developing Velvet Calatheas is to separate the stems with roots. Assuming that your Warscewiczii has crowded its pot, you can pull individual divisions separated. Unpot the plant and divide the roots into segments with one leaf each. On the other hand, separate the plant’s rhizome with a clean cutting instrument. Ensure each part has roots and one leaf.

Within a few weeks, the plant will develop.

Bumpy growth on stems or mold on the foliage is due to scale insects. Rubbing alcohol or neem oil can be used to prevent scale insects.

Fuzzy white dots on the plant leaves are mealybugs. They can be killed with rubbing alcohol.

Spray the neem oil solution on the Jungle Velvet Calathea foliage once a week to eliminate pests.

Fungal diseases associated with root rot are the most common factor that affects Jungle Velvet Calathea. Overwatering or poor soil drainage typically causes roots to decay. In time, you may notice leaf spots or yellowing leaves that start to wilt.

The best way to prevent diseases from affecting a Jungle Velvet Calathea is to water it properly. The golden rule is to only water a calathea when the potting mix has partially dried.

Calathea Warscewiczii is a remarkable variety with velvety foliage. Warscewiczii prefers reliably soggy, well-depleting soil and brilliant to-medium aberrant light. The humidity of more than 50% keeps the plant putting its best self forward.

Give them a warm temperature all year and feed them delicately through the developing season. They could do without being upset and favor rare repotting.

Is Calathea Warscewiczii hard to care for?

Calathea warscewiczii is considered a fussy plant because it needs higher humidity than the average home offers.

Why is my Calathea Warscewiczii drooping?

If the soil dries out too much, Calathea Warscewiczii leaves will start drooping. Check her soil and only water if the first few inches of soil are dry.

Like all the other calatheas, Calathea warscewiczii is non-toxic and pet-safe.

Should I cut off crispy Calathea leaves?

Don’t trim away more than ⅓ of the living foliage in one sitting, or your Calathea may find it hard to recover.

Why do Calathea leaves curl at night?

Calathea leaves curling is a sign that the air is too dry. All varieties of calathea require high humidity to thrive. When humidity is too low, leaves can curl up, and the edges may turn brown. 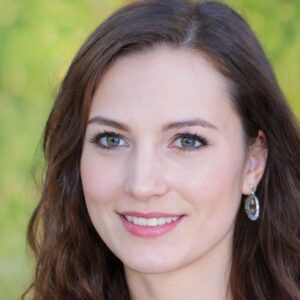 I'm a plant lover. Caring for plants and watching them thrive provides me with inner peace. I enjoy gardening tremendously. It gives me a feeling of attachment to the world of nature. Gardening as a hobby is more than recreational; it has everlasting benefits. Gardening rejuvenates our minds and souls.